Leveller Media, the world’s first fan-owned blockchain and NFT entertainment studio, announced its participation in The Inventor, a stop-motion adventure film about Leonardo da Vinci. The film is written and directed by Jim Capobianco, the Academy Award-winning writer of the Pixar hit film Ratatouille. Oscar-Nominated Wolfwalkers Director Tomm Moore recently joined the project as well, to direct the 2D sequences of the film.

The Inventor follows the insatiably curious and headstrong inventor Leonardo da Vinci, voiced by Stephen Fry (Gosford Park), as he leaves Italy to join the French court, where he can experiment freely, inventing flying contraptions, incredible machines, and studying the human body. There, joined in his adventure by the audacious princess Marguerite, Leonardo will uncover the answer to the ultimate question: “What is the meaning of it all?” The cast also includes Daisy Ridley (Star Wars), Matt Berry (Toast of London), and Marion Cotillard (La Vie En Rose).

Leveller seeks to disrupt the entertainment industry by allowing the public to invest in entertainment they want to see through Decentralized Film Financing. The investment offering is currently open to accredited investors at a minimum of $10,000 via the Securitize platform throughout the United States and Canada. International investors in Africa, Asia, Europe, and the Middle East, including Australia, China, Hong Kong, Israel, Singapore, and the United Arab Emirates who meet their national qualifications may also invest. Accredited investors may learn more here.

Marty Katz, Leveller media advisor, independent producer and former EVP of Walt Disney Studios, said: “In my many years working in the entertainment industry as a studio executive and independent filmmaker, there is little doubt in my mind that a platform like Leveller is much needed. It allows artists to create freely through new methods of blockchain and cryptocurrency financing, providing the opportunity to make socially relevant and more diverse projects that fall outside of mainstream Hollywood.”

Leveller Media is also setting its sights on entertainment outside traditional films, looking toward the production of NFTs. Creators will be able to create NFT tokens based upon original art, proprietary content, and intellectual property (IP) such as characters, storylines, outtakes, musical scores, and art. Leveller is also progressing into the distribution of video as NFTs, leading the entertainment industry into a new era.

“We are excited to see the announcement by Coinbase this week that they will be launching an NFT marketplace,” said Eric VonFeldt, co-founder of Leveller Media. “As we continue to grow the Leveller Media ecosystem to allow entertainment creators to produce NFTs, we look forward to working with well-respected companies like Coinbase. We hope to be able to further engage Coinbase in the future to find new and exciting ways we might be able to partner with them on the NFT front.”

Based in Malibu, Leveller Media is a globalized entertainment studio and blockchain-powered investing platform. Backed by an advisory board of seasoned entertainment, business and tech executives, Leveller’s mission is to enable fair and open entertainment financing and production by directly connecting creators, investors, and fans. Leveller is working to build a world where all creators are empowered to tell their stories. For more information please visit https://leveller.io/. 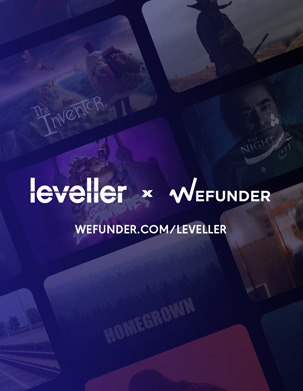